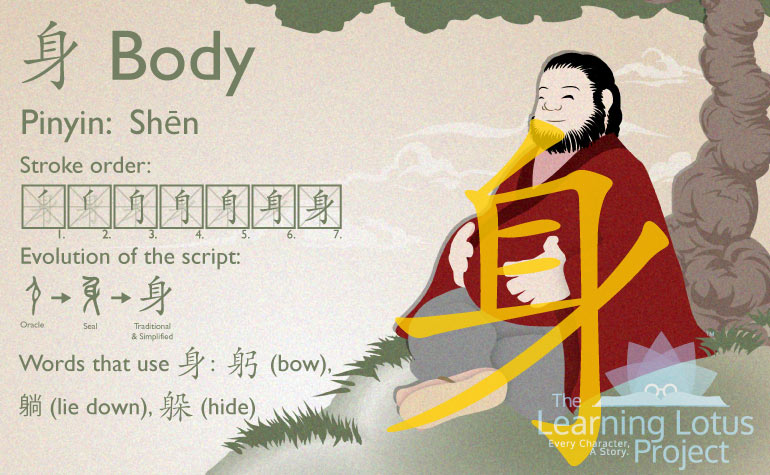 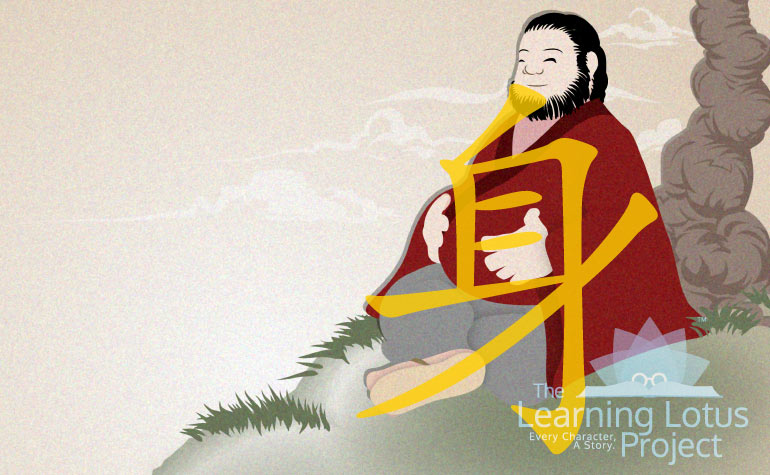 In an ancient Chinese story there was a teacher with a large belly who read Confucius and Mencius extensively. When he laid down to rest during the day, his stomach resembled a small mountain. His students ridiculed him and created a rhyme: "边孝先，腹便便，懒读书，但欲眠." (Biān xiào xiān, fù pián biàn, lǎn dúshū, dàn yù mián.), translated to "A person's stomach is so large; thus his studying is lazy and he requires so much sleep". To which Bian Shao replied: "边为姓，孝为字，腹便便，五经笥." (Biān wèi xìng, xiào wèi zì, fù pián biàn, wǔjīng sì), "My stomach is large because it is filled with knowledge". This story demonstrates this character's pictographic origin; a man with a large belly.

In Romance of the Three Kingdoms, Guan Yu a General for Liu Bei was captured by warlord Cao Cao. However, Cao Cao was impressed by Guan Yu's martial prowess and made him Lieutenant-General in his army. Despite many gifts and kind treatment from Cao Cao, Guan Yu's loyalty to his original master never wavered. This story is the origin of the popular idiom "身在曹营心在汉." (shēn zài cáo yíng xīn zài hàn) translated to "The body is in the Cao camp, but the heart (soul) remians with the Han" meaning that one can be physcially present, but one's loyalty is somewhere else.