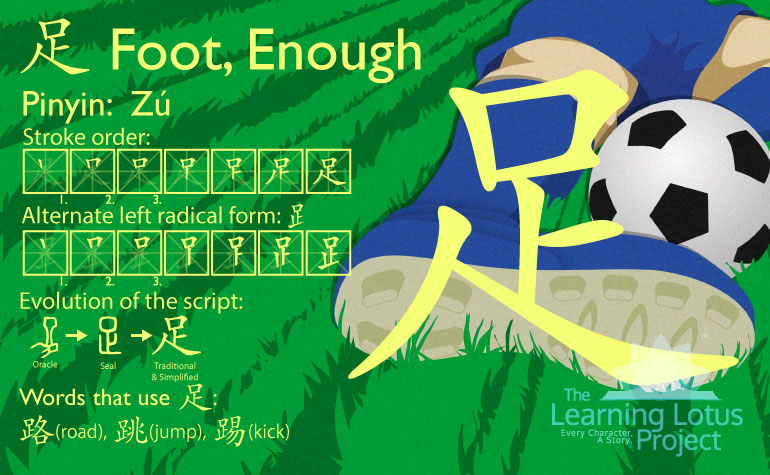 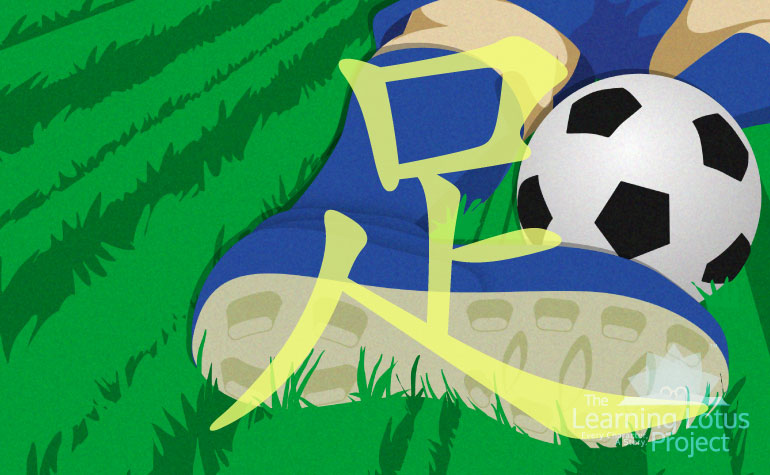 The Oracle Bone form of 足 is a pictograph of a foot with a shin, showcasing its origional meaning of "foot". The top part of its modern form resembles "口", but is the shin bone from the Oracle bone form.

足 is a word and a radical found as a component character in many words related to the foot or actions performed with the feet such as: 路(lù, luò) "road", 踢(tī, dié) "kick", and 跳 (tiào) jump.

足 can mean "foot", "attain", "satisfy" and "enough" and can be combined with other characters to form words such as: 足球 (zúqiú) "football (soccer)", 十足 (shízú) "ample, complete", 自足 (zìzú) "self sufficient", and 足 弓 (zúgōng) "foot arch".

The idiom 画蛇添足 (Huà shé tiān zú) "draw a snake and add feet" originates from a story during the Warring State Period. A group of servants were competing over a pot of wine by seeing who could draw a snake on the ground quickest, using sticks. One man finished quickly before all the others and boasted that he had enough time to add feet to his snake. While he was adding the feet, another servant finished his snake and took the wine for himself saying "Snakes don't have feet. You are not the first to finish after all. I win!" Today, 画蛇添足 is used to suggest that superfluous additions to a finished work can actually ruin it; much like the English idiom "to gild the lily". It can also be used when someone expounds upon something even after the concept has been explained clearly.