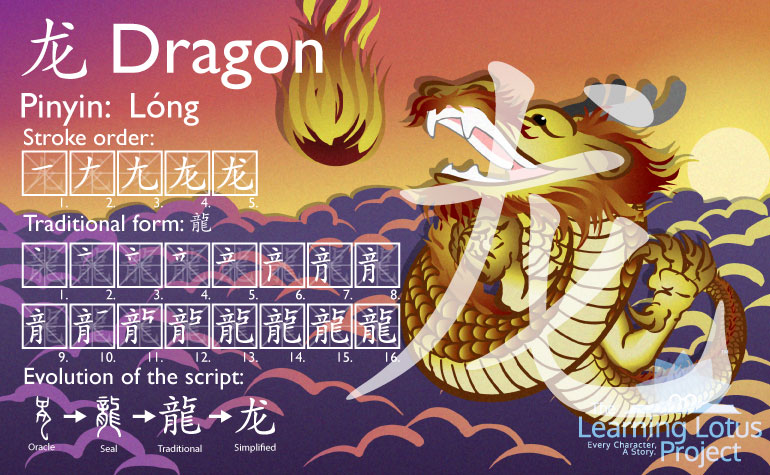 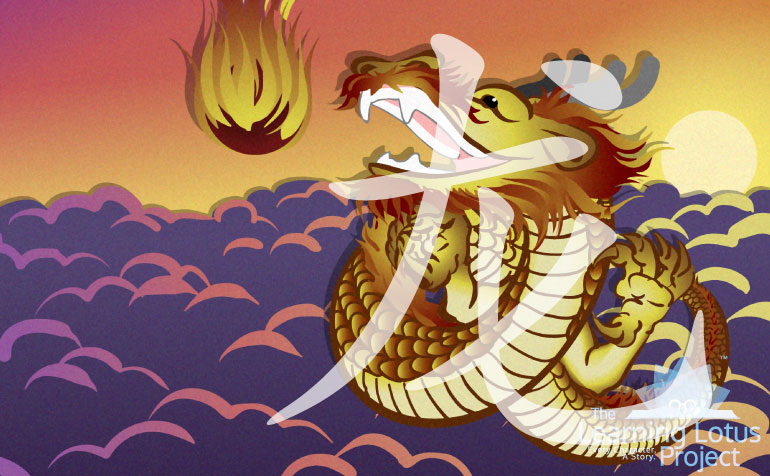 The Oracle Bone form of 龙 was a simple depiction of a dragon. Its traditional form is one of the most complex radicals in the Chinese language consisting of 16 strokes, with the long beard, antlers clearly depicted on the left and the snake-like body on the right.

When the character was simplified, it was reduced to 5 strokes. Dragons are prominent figures in Chinese mythology and legends and were believed to be the rulers of water and weather. There were four Dragon Kings representing each of the Four Seas, and the Chinese constellation "Azure Dragon" 青龙 was the celestial guardian of the East.

The dragon is a symbol of power, strength and luck. It is one of the 12 Chinese Zodiac animals. Birth rates spike during the year of the Dragon because babies born during the year, known as "Dragon Babies", are considered lucky and are believed to have desirable characteristics. The emperors of China were often associated with dragons, some born from - or even becoming dragons, or being born with dragon birthmarks. A five-clawed dragon was a symbol of the emperor during many Chinese dynasties.

The idiom 叶公好龙 (yè gōng hào lóng) "Lord Ye loved dragons" describes someone who professes their love for something, but actually fears it. Lord Ye lived during the Spring and Autumn period. He claimed he loved dragons and adorned his clothes and home with their image. However, when a real dragon heard of this and visited him, Lord Ye ran away screaming in fear. Lord Ye didn't love dragons but rather depictions of dragons.